Since 2010, we have seen many unforgettable offensive shootouts, insane playoff games, and legendary Super Bowls. Let’s take a look at the 10 best that you should at least check out on YouTube. I’ll be ranking them on entertainment, importance, and how memorable the game was. Obviously, postseason games will rank higher(most of the time) than regular season games because they are more significant. I will put the games that are back and forth all the way through on the list rather than games like Patriots vs Falcons in Super Bowl 51 where it was one team dominating the game one half while the other team dominates the second.  Playoff games from the 2009 season count because the playoffs took place in 2010.

This game was the perfect blend of a defensive battle with crowd stunning touchdowns. Beast mode’s 40-yard touchdown run, Jermaine Kearse’s 35-yard touchdown catch, and Anquan Boldin’s 26-yard touchdown catch were all exciting plays to keep the game at a great pace. Also, this was a heated rivalry game with, what at the time, people thought were the 2 future top quarterbacks of the NFL and two respected coaches. This game was a battle that came down to the last play where the legend of Richard Sherman was born. Tipping the pass into an interception gave Seattle a chance for their first super bowl win and created an iconic moment.

Kurt Warner and Aaron Rodgers went into an all out war by the end of this game. Rodgers fought back from being 17 down got the game to 45-45 by the end of regulation. The quarterback to receiver chemistry was great in this game as the offenses had no problem putting up a show for the ages. In a shocking turn though, in over time, Rodgers fumbled the ball on the first snap and the Cardinals ran it back for a touchdown. It was an out of nowhere ending the NFL never seen before or since. Classic modern day shootout that gives the fans the entertainment they want.

This Super Bowl featured so many memorable plays topped off by the “Philly Special” where Philadelphia hero, Nick Foles, caught a touchdown pass. This game showed that the underdogs always have a chance as the Eagle’s miracle was completed. The game featured the Patriots clawing their way back into the game throughout while their defense unexpectedly fell apart. The back and forth second half kept fans having no idea if the upset would actually happen. It did and capped off the most known underdog story in the history of the NFL.

A rematch of their AFC Championship a few years prior, this game was even more exciting and memorable. Who could forget Julian Eldeman’s touchdown pass and Brady’s game-winning touchdown. It was a hard-hitting rivalry game and you could tell the two teams knew and hated each other. It made for a great game, but after Brady’s last passing touchdown in this game, Joe Flacco could not respond ending his last good run in Baltimore.

Manning’s first playoff game started off insane. A 90-yard punt return, to a 59-yard pass touchdown, a 39-yard pick 6, and a 15-yard touchdown pass all happened within the first 10 minutes. Tied up at half, both teams knew it was gonna be the last team with the ball to win. Down 35-28, Joe Flacco threw a miracle touchdown pass to Jacoby Jones to tie the game at 35 and bring it to over time. The game went into an insane double overtime and after a defensive overtime battle, the Ravens scored the winning field goal. This was an instant classic right after the game-winning kick by Justin Tucker.

Two great offensive minded coaches with quarterbacks playing the best they ever have made for an unpredictable matchup. Although it was a solid battle until the 4th, the ending is what put this game on the list. With under 5 minutes left, Darren Sproles took it to the house to give the Saints the lead. Alex Smith responded with a touchdown, but moments later Jimmy Graham took a 66-yard touchdown pass to the end zone. Down by 3, Alex Smith made the throw of his career with a 14-yard touchdown pass to Vernon Davis ending the game. This was arguably the most memorable ending of all the games on the list.

The best NFC team vs the best AFC team on Monday Night Football delivered the expected hype. Interceptions, defensive touchdowns, fumbles, offenses going up and down the field, this game had it all. It was not even just the offense of these teams putting up all scores. There were 3 defensive touchdowns in this game making a huge difference in the end. Even the end was not expected as Mahomes threw an interception when everyone thought the Chiefs were going to go down and score. If this is not the best regular season game of all time, then it’s at least top 3. The greatest quarterback of all time vs what many believe to be the next face of the NFL in the first AFC Championship game at Arrowhead Stadium. While the first half was not greatly entertaining, it still gave a shock factor seeing that Chiefs offense struggle worse then it ever has. In the second half though, is when the back and forth started. Brady threw some pics, there as a few fourth down stops, and the Chiefs were back on top. Their defense fell apart against the Patriots after the Chiefs took the lead giving up 20 points in the 4th and over time. The Chiefs stuck with them, tieing the game to take it to Overtime. The overtime was kind of lame as the Chiefs never had a chance to fight back, but this game still kept everyone jumping and being shocked throughout. One of the most competitive AFC Championships we have ever seen. 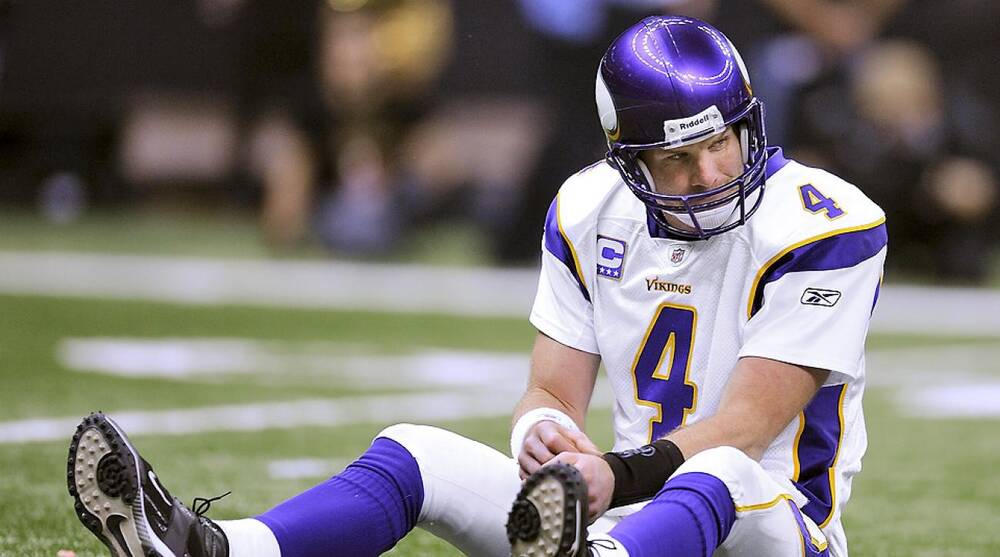 Adrian Peterson and Brett Favre led a charge against Drew Brees and Sean Payton to make one last push at a championship for Favre. A constant back and forth filled with exciting plays and a heartbreaking ending. After 3 hours of taking a beating, Favre needed just a few more yards for field goal range. Instead of playing it safer, Favre took one last risk and threw it across the field. It was picked off by Tracey Porter and the Saints won on the first possession of over time. Favre’s last mistake kept the Vikings curse going and created one of the most mind-boggling endings ever. This NFC Championship is by far one of the best ever.

The Legion of Boom and Tom Brady went into a dog fight throughout this game. It was hard hitting, there were mistakes, a classic 4th quarter Brady comeback, and the most insane ending there will ever be in the NFL. This game showed the greatest balance of good defense and offense throughout the game. The game was tied at half, but Seattle took a 10 point lead in the 4th. Brady came back throwing 2 tds, and his efforts were capped off by the most controversial play ever. This Super Bowl will not just be remembered for the ending, but also the atmosphere it holds. So many all pro players and hall of famers, back and forth between two completely different teams, a comeback from the most clutch quarterback of all time, and you got a game that will never be forgotten.